I get it. I really do. All you moms and dads grew up here together in Candyland, Texas and have been friends your whole lives. As a result, your kids have been friends since they day they were born. They spend weekends together and see each other over the summers and play on the same sports teams. I think that's fantastic. I am also almost a little envious because it's obvious your particular children are and will likely be the "cool kids" all the way up through high school. They are smart and good looking and have loads of self-confidence. But, and I hate to be the one to break it to you, they are little [jerks].

I will be the first to admit that Bear is kind of nerdy and awkward. He is very naive and probably a little less mature than your boys. But he is also sweet and innocent and one of the most loving, empathetic children I have ever known. Yes, he tries too hard. He will do almost anything to get to play with "his friends." He has been friends with your boys since Kindergarten and he really doesn't get why they don't want to hang out with him any more. And there isn't anything wrong with the fact that they don't want to hang out with him - the differences between him and your boys becomes more and more obvious every month. I am encouraging his friendships with other kids who are more like him.

But I wish that there was a way that I could actually communicate with all of you to PLEASE explain to your boys that there is no reason at all for them to be mean to Bear. They don't have to sit next to him at lunch. But they also don't have to make a big show of not letting him sit near them in the cafeteria - and THEN taunt him during recess about how he didn't GET to sit with them at lunch. They don't have to pick him to be their sit-up partner in PE, but they also don't have to say, "I pick Joey - NOT BEAR!" Please explain to your boys that just because it's easy to make my Bear cry, they shouldn't make that their daily goal.

I know most of you well enough to know that if you could see how they treat Bear, that you would be horrified. But I don't want to be "that mom" who calls and tattles on your kids for being mean to mine. I am doing my part by trying to explain to my son that if he cries when the boys say things that it will only get him labeled a "crybaby" and they will keep trying to make him cry. But there's a fine line there that I'm having trouble discerning at times. I don't want to make my kids think it's not okay to feel their feelings, but I am also trying to let them know that they don't have to express every feeling they have every moment they feel it. My heart hurts for my little boy. And his teacher even encouraged me to take him home early for some extra snuggle time yesterday because even SHE saw that your sons were really giving him a hard time.

I know that Bear only has to get through the end of the school year and then we are moving. It's kind of a relief because at least he'll be getting a fresh start. I feel like he has been labeled now and has a big target on him. If we were staying here, I would probably move him to a different school, which breaks my heart because I LOVE our school. But my boy is feeling beat down more and more. I hope that he recovers. Hell, I hope that I recover.

In the end, though, I have decided that I would much rather have a slightly dorky kid who is smart and empathetic and so full of love than an uber-athletic, popular [jerk]. ANY DAY.

**edited** This post has put back in drafts for quite a long time since I originally posted it. I called these boys a name that was entirely inappropriate. It was not okay for me to do that. However....the rest of the sentiment and the facts behind this post remain. I've decided that since it is part of what really happened in our lives, I am going to post the edited version of it because I don't want to forget.
Posted by buffi at 6:04 PM No comments: 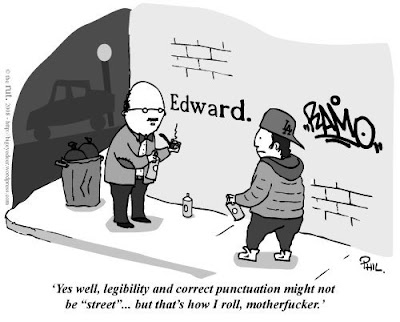 Yes, I know it's been a loooonnggg time, and now I'm just posting a picture again, but this makes me laugh & I need to share.
Posted by buffi at 8:26 PM No comments: