Sorry about the lack of posting again, but....

You know what I hate? I hate being unable to post and share what is going on with me and my kids and all of the funny, joyful, irritating, crazy, LIFE around here. And WHY am I unable to post? Because of the possibility that every word I type can be used against me (and probably is). And I hate that. It makes me angry. Because it shouldn't be that way. But evidently it is. So, sorry, all three people who still read around here. Just thought I'd give you an explanation.

As it is, everyone is healthy. Everyone is happy. It is summer, so everyone is whiny - especially me since I'm working my tail off in school, trying to get this MA done as quickly as possible AND spend time with my kiddos, because they are growing up so fast. I'll fill you in someday. I hope. Comments will be turned off on this post. Email or call me if you want to offer encouragement. I love you guys.
Posted by buffi at 5:10 PM

Email ThisBlogThis!Share to TwitterShare to FacebookShare to Pinterest
Labels: bitching AND moaning, Bitchy much?, divorce, grief, PISSED, stuff nobody really cares about, whining.

Of birthdays, and deuling, and other very BOY things

Shamefully, I let the entire month of May and half of June pass without mention of the fact that BOTH boys had another birthday. While I have tried to strongly discourage any further growing or maturing or aging, these children stubbornly insist on growing up. *sigh* So disobedient. See? Right there? Hoodlums. ------->>
First, my Buggy Boy turned eight. He was truly looking forward to his birthday this year even though he knew it was going to be was very low key. Somehow, eight was a really big deal to him. It's hard having one of the last birthdays of the school year. But as Bear and I can both attest, it still beats having your birthday after school is out. His Daddy called from Overthereistan and I think he got to webcam with Daddy as well. Daddy got Bug the DSI xl (or some device with a similar acronym, I can't keep it all straight) that he wanted. Very exciting. Gram and GrayGray came for the weekend. A close friend brought his daughter over to celebrate - both of whom the boys think are pretty awesome. All the kids (Bear & Bug, SugarPlum, Little Miss & her Daddy) had a huge water gun fight in the back yard which was, in the words of the birthday boy "AWESOME." Bug got to pick where to eat supper - Buffalo Wild Wings, in case you were wondering...he thinks WINGS are the greatest food in the world right now. (I don't get it. Maybe it's a guy thing) Then back to the house for presents and his ARMY GUY cake. 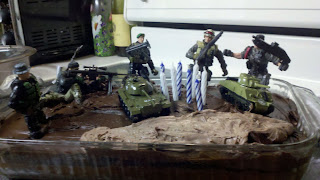 Somehow, it has become kind of a tradition that the boys' cakes include some sort of action figures. This was actually born out of laziness and lack of skill on my part in making any sort of cool theme cake and now they look forward to the toys on the cake and I can include that as one of their gifts. Pretty much a win/win if you ask me. Anyway, after cake he opened presents, was slightly disappointed to discover that he did NOT get Big Game Hunter (or something like that) for the Wii, but he was pretty happy with all of his gifts.
Ten days later, we were in Candyland West (also known as Gram & GrayGray's house) for Bear's birthday. He turned 10. TEN. T.E.N. Double digits, folks. Oh. Em. Gee. But it hasn't done a thing to detract from his sweet nature. He was happy because he got to meet his precious new baby cousin (and my beautiful, precious new nephew! I'm FINALLY Aunt Buffi for real!) (we'll call the baby [my brother's] Tadpole for now....maybe Tad for short) and my Bear loooooves babies. And this is one of the sweetest, most laid back babies in the history of EVER. We got to go swimming at the home of one of my bestest friends from high school and then Bear got to choose where we went to dinner (a wonderful Italian place that has the absolute best calzones on the entire planet - including Italy) and we were joined by Gray, Gram, my two precious beautiful (and now-entirely-grown-up-adults-because-they-won't-listen-to-me-either) cousins, and our close friend. After supper, we had cake (Bear really wanted a Harry Potter cake but we could not find Harry Potter action figures - which is weird, right? BUT he was delighted to get a Phineus and Ferb cake - no pictures though because I cannot find my damn camera). Bear also got a special phone call from his Daddy, which ALWAYS makes him happy and got to open his gift from Daddy (same as Bug's) before we left Candyland. He liked ALL of his presents - especially the Banzai Samurai Dueling Sticks because now he and his brother can beat the crap out of each other with fewer drastic consequences.** I also have decided that any arguments are going to be resolved by going outside with the sticks and not coming in until they have reached an agreement. SugarPlum is not too keen on this idea.

So, now I have these older children. They are pretty fantastic when they aren't conspiring to make my head explode.....which, honestly is a good part of every day, I am quite certain. But they are funny and smart and well-behaved (when they aren't acting like meth-addled monkeys) and loving and cuddly and just imperfect enough to make them perfect.
**The "rules" on the box for the Banzai Samurai Dueling Sticks state that there are no "points" awarded for hits to the head, face or groin and a couple of other areas. I read through the rules carefully with them before and asked if they understood. They nodded enthusiastically, indicating that YES they did understand fully and could they please just go out and begin beating one another already. I also included a "Mommy Rule Addendum" that stated that any hits to the head, groin or face would result in a 24 hour suspension of Banzai Samurai Dueling Sticks privileges and the offender would have to clean the bathroom for a week. More enthusiastic nodding, accompanied by eye-rolling. I then asked if they knew what the "groin" was. And no, neither of them did, of course. And since it was the middle of the night in Overthereistan, it fell to me to explain. Good times, people. Good times. It took less than five minutes before someone came in crying. And I sent them right back out. No blood, no bones sticking out, no sympathy....
Posted by buffi at 12:18 AM 3 comments: