How to tell a joke (if you're three)

Me: Funniest thing I've heard all day, kiddo!
Posted by buffi at 3:02 PM No comments:

Very busy, crazy days here lately. Bear was sick all week and finally went to school on Friday. We got a new, roll-top computer desk (veeerrry pretty!) that was delivered Saturday. Then we had a new, humongous area rug for the family room Wednesday, which means no more hard, cold wood floor any more. Yaaaay!

The result of the new desk and carpet was that I had to take the computer apart. For several days, I was using my laptop exclusively (once the DSL was back up). I was pretty apprehensive about trying to put the computer back together and had a tech-saavy friend from church on stand-by to come over and rescue me from the process. Because let's face it. If you know me at all, you know how NOT mechanically or technically inclined I am!

Imagine my surprise when I was able to get everything up and running all by myself!! I was feeling pretty smug. Only two issues came up. (heh) First...the keyboard was oh, about three millimeters too wide for the little drawer. And? While the computer sat disassembled, one of my children (I'm not naming any names, but I'm fairly certain that this child is of the three-year-old persuasion) broke the printer. Pulled some stuff out of it. My tech-saavy friend took a look at it and said that while it could be repaired, it would be at least $90. So, after consulting SD, we decided to go ahead and get a new keyboard and printer. Bug and I journeyed to Circuit City yesterday and purchased both (note to self: don't take Bug to an electronics store by myself again soon).

Today, I braved the big, bad PC again and successfully installed the printer and the new keyboard!! This much not seem like a big deal to some of you, but I have never done this before and I am feeling very empowered. As SD said the other night, now I can move to India and work in tech support. We're gonna be rich!
Posted by buffi at 10:04 PM No comments:

Email ThisBlogThis!Share to TwitterShare to FacebookShare to Pinterest
Labels: awesome me, kids, stuff nobody really cares about

Thoughts and questions and stuff nobody cares about but me...

Email ThisBlogThis!Share to TwitterShare to FacebookShare to Pinterest
Labels: bad mom, bitching AND moaning, house cleaning, it's entirely possible that I could become an alcoholic, kids, schools out, sick kiddos, stuff nobody really cares about, SugarBear, SugarBug

Seriously, I am so over this weather

Email ThisBlogThis!Share to TwitterShare to FacebookShare to Pinterest
Labels: well it made ME laugh

Things that were supposed to happen this weekend:


What ACTUALLY happened this weekend:

~*~ Stuck in house all by ourselves for three days straight with lots of time to think about how much we miss Daddy.

Well, winter finally decided to come to Candyland. And it's here with a vengeance. The rain started Friday morning and by noon the temperature had plummeted to nearly freezing. By the time I picked the kids up from school, there was ice on the van. We haven't left the house since we got home Friday afternoon.

After looking at the radar and weather forecasts Friday morning, I called my parents and CRB and told them both not to come. The roads were going to be really icy well before they made it to Candyland PLUS there is no guarantee as to when they would be clear for them to get out of here. You know it was bad if I told people not to come and relieve the monotony.

Bear and SP were disappointed that their games were cancelled. Bug is still clueless about the birthday party, even though we had picked out a crown, fancy hair stuff and a fuzzy scarf for his friend M's birthday. (Don't ask me, these were the things that he picked out and insisted that he had to get her. He's a funny little guy!)

SP was even more disappointed that CRB and her daughter (my beautiful god-daughter!) didn't get to come. She is b-o-r-e-d. But, what self-respecting ten year old isn't? She mentioned today that this reminds her if the Little House book, The Long Winter. I agreed, with a few caveats. We have plenty of food, central heat, communication with he outside world, it's only three days, and there is no blizzard.
We have had an okay weekend so far, though. Mostly we have slept in (even Bug!), snuggled, watched movies, baked and, of course, it wouldn't be a weekend without the boys beating the crap out of each other ten or twelve (thousand) times. The whining though, has been kept to a minimum. By the children anyway. I have been whining to anyone who will listen. And even a few who didn't want to listen. So, if your phone rings this afternoon...check your caller ID!

School is out today, thank goodness. Hopefully the roads will clear some so that everyone can go to school tomorrow. Togetherness is good, but come on!
Posted by buffi at 10:13 AM No comments:

Email ThisBlogThis!Share to TwitterShare to FacebookShare to Pinterest
Labels: bitching AND moaning, family, it's entirely possible that I could become an alcoholic, kids, stupid weather

A good friend sent me this joke and I'm still laughing. Hope it makes your weekend a better one!

A 6 year old and a 4 year old are upstairs in their bedroom."You know what? ' says the 6 year old. "I think it's about time we started cussing."

When their mother walks into the kitchen and asks the 6 year old what he wants for breakfast, he replies, "Aw, hell, Mom, I guess I'll have some Cheerios."

WHACK! He flies out of his chair, tumbles across the kitchen floor, gets up, and runs upstairs crying his eyes out, with his mother in hot pursuit, slapping his rear with every step. His mom locks him in his room and shouts, "You can just stay there until I let you out!"

She then comes back downstairs, looks at the 4 year old and asks with a stern voice, "And what do YOU want for breakfast,young man?"

Email ThisBlogThis!Share to TwitterShare to FacebookShare to Pinterest
Labels: potty mouth, silliness, well it made ME laugh

SD's last weekend, being what it was, was pretty great. From my perspective, anyway. We got to spend some really great family time together, I got to sleep in (which is always a plus!!) and...then he left. Which sucked. Big time.

Before that, though, we had a blast celebrating SugarPlum's birthday. Friday night, my parents came to town, as usual. So, while they watched the boys, we took SP out to dinner. She decided that she wanted to go to the nice seafood restaurant down the street and she had lobster tail and grilled shrimp. Yes, you read that right, lobster tail and grilled shrimp. It was her birthday and we told her that she could have anything that she wanted. When Pop Pop was here a few weeks ago, we took him to that restaurant and that was what he ordered. He shared a bit with SP and girlfriend was hooked! I was skeptical as to whether she could actually eat all of that food, but that child ate every. single. bite. All of the lobster. All of the shrimp. All of the grilled vegetables. All of the rice. PLUS a huge salad and probably half a loaf of bread. I was gobsmacked. The waitress was duly impressed as well!

After supper, we went home and she opened presents. Her Daddy got her a very nice doll from Norway. Gray Gray and Gram got her some books and some new goalie gloves. Bug gave her some CDs and Bear gave her some more books. Mommy got her some clothes to wear to her birthday party and SD & I got her a new clock radio. She LOVES the clock!

Her party was fantastic! She invited seven friends to go rock climbing at an old grain elevator that has been converted to a rock climbing facility. Some of the girls were a little nervous, but everyone seemed to really enjoy themselves. My SugarPlum, as it turns out, should have her nickname changed to Spider Girl!! She climbed in the boulder room, she climbed the 50 foot walls a few times and then, a the end of the party, she impressed everyone by scaling the 120 foot wall! Everyone in the place cheered when she reached the top. She was a little sore Sunday morning. To say the least.

So.......I was going to show you pictures, but blogger is being a PITA (big surprise). So, you'll just have to go see them over at Flickr.


PS We miss you so much already SD. The bed is very cold. Come home soon!
Posted by buffi at 10:21 PM No comments:

Ten years ago today I got the job I had wanted for my whole life. I finally became a Mommy.

Mommy to the smartest, kindest, funniest, most beautiful girl in the whole wide world.

Thank you, my Angel for initiating me into this wonderful club. I could never dream of a child better than you. You make all my dreams come true (and occasionally some of my nightmares!). 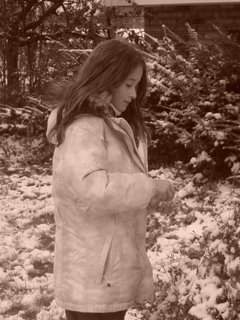