(If you begin to feel offended by this post at any point, please see the note at the end.)

Due to the big (ish) move and the big changes and the slight bullying issue, my boys have been attending a private Christian school here in Candyland. It's ironic because I have spent the past eight years singing the praises of the Candyland Independent School District. Because honestly, the public schools here are fan-freakin-tastic. My kids have all been blessed with wonderful teachers almost every year and have learned so much. In fact, SugarPlum has remained at the junior high she's been attending since the sixth grade and next year she will go to one of the three fantastic high schools that CISD has to offer. (Heaven help me) Really, you can't go wrong when it comes to high schools here, especially.

But...(you knew that was coming, right?)

Bear needed a fresh start. A place where he felt safe and could count on some spiritual guidance as well as an almost zero tolerance for any kind of bullying. And Bug...well, my little Buggy is one smart kid. And he was getting bored and failing to see the point of doing the work at school last year. Oh, he was making good grades but he was also making his teacher (who was amazing) and his mommy insane. He really likes having attention. And since the State of Texas has mandated that there can be up to 22 students to a class in the lower grades, it makes it hard for a smart guy to get attention when the teacher is having to devote time to the kids who don't get it. It's not the teacher's fault. I've been in her shoes. 22 Kindergarteners. One me. Not good. So, in order to get attention, Bug was acting out and getting in trouble. More and more often. I feared for what second grade held for him.

I decided that, for these and a host of other reasons, my boys needed the guidance and supervision on a private, Christian school. They have really flourished there. They both love that they get to study the Bible and that they have chapel weekly. Bear comments often about how he has friends and how he doesn't feel so sad and picked on. Bug's teachers have recognized how smart he is and also how easily distracted and bored he can get. And since there are only ten (yes TEN) kids in each class, they are able to keep closer tabs on him and change their tactics with him to keep him challenged and engaged. I LOVE it.

Here's the thing. Since the classes are so small, they are able to do little plays and presentations that the parents are invited - nay, encouraged - to attend. These little things only last a few minutes, but they require a huge chunk out of my day to plan around them. They usually fall at just about the time I need to go pick up SugarPlum. Also? They are mind-numbingly boring.

Maybe it's because this is my third kid, but honestly, the ten minute vignette Willie the Walrus is something I feel like I can go the rest of my life without seeing. Just like the Johnny Appleseed "play" they did in the Fall. Problem? All the other mommies show up, video camera in hand, to see their little angels and Bug is left feeling like his mommy doesn't care. No, really, he said that. For reals. And so, I will trudge myself up there in the middle of a busy Wednesday afternoon, the day after MY school starts to watch Bug go "Arrr arrr" in his three second role as a sea lion (I KID YOU NOT). I will take care to be ON TIME this time because I was a few minutes late to the Johnny Appleseed play and they were already finished. So they performed it again. Just for me. Oh, yes they did. And all the other, good mommies looked at me with their "tsk tsk" faces the whole entire time. Which meant that I had to applaud like the entire Barrymore family had assembled to perform Macbeth for my sole benefit.

My only plea...is there any way that perhaps we could find a way to serve cocktails at these little theatrical events? Just a small cordial would really go a long way in helping motivate me to get there. A small glass of wine, a mini-martini....something? It doesn't have to be huge. Just enough to get me through the tedium. Just consider it, Candyland Christian School. I know I'm not the only mom who feels this way.

Also, the Family Night/Silent Auction? Would raise a LOT more money if you had an open bar. Just sayin.

***Please recognize how very tongue-in-cheek this post is. I LOVE seeing Bug and all the kids perform and wouldn't miss it for the world. I love and adore each and every teacher at CCS and wouldn't change one single thing about it.****

***Also, I am not advocating drinking at school events and would never, ever even consider drinking and driving my children anywhere. Or anyone. Or even just me. Oh, for crying out loud, you get what I am saying, right?!!***
Posted by buffi at 11:50 PM No comments:

Do you see that over there? ------>
In the sidebar, under profile? Did you notice the change? SugarPlum is now 14. FOURTEEN. Years. Old. It happened a few days ago. Nobody asked me if it was okay or anything. Just BAM....she wakes up Wednesday and suddenly, she is fourteen years old. 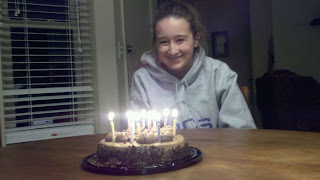 I mean I guess I saw the warning signs. She is a good three inches taller than me. She keeps stealing my shoes. When anyone folds laundry, they have to ask whose jeans those are, hers or mine (Which, can I say, is kind of awesome that I can wear the same size jeans as my teenage daughter? One of the few perks of the chaos that has been my life the past couple of years.). She has *ahem* curves and stuff. She has that eye rolling/heavy sigh thing down to a science.
But all-in-all, I think I hit the jackpot when it comes to teenagers. She likes me! Or at least she pretends to. But I think that she really does like me. She tells me that her friends think I'm hilarious - in a good way. She is so mature and responsible that it is almost scary. It's kind of a relief when she does do the heavy sigh/eye roll combo because it lets me know that she is a normal kid. And she is so unbelievably freaking smart. No, really. I could go into detail, but then I'd be obnoxiously braggy so we'll just leave it at that. And athletic - still playing soccer (she is such a kick-ass goal keeper!), basketball, volleyball, and track...and she has the muscles and body to prove it.
Her little brothers think she hung the moon. Bug told me recently that he LOVES it when SP babysits because it's fun and she makes cool stuff to eat and he likes how she puts them to bed. For real. She also makes up all these neat games for them that involve knights and dragons and all kinds of imagination. Plus, she snuggles them and reads to them and encourages them....
So much for not being obnoxiously braggy.
I guess that having a teenage daughter isn't so bad after all. But I know I'll pay for it with these boys. *sigh* Even though they are pretty awesome, too.
I love you SugarPlum!
Posted by buffi at 3:19 AM No comments:

Okay, I usually refuse to make New Years Resolutions. Things that seem like a good (or at least achievable) idea in early January, don't always turn out to be so fantastic a few months later. But here are a few (I think maybe) I can actually attain:

1. Get at least three more boxes unpacked before school lets out for the summer. (I just moved the second week of December) I think I may have actually unpacked SIX boxes now! (1/28)
2. Fold the clean laundry before the children outgrow it. Woo hoo!! The laundry was all folded and put away for about four hours last week. I make no promises for the future. (1/26)
3. Clean out my purse. Specifically all of those useless receipts. Okay, this WAS done. But more receipts have taken their place)
4. More pie. *sigh*
5. Make sure that plate cover thingy stays in the microwave.
6. Cordless phones ON THE CHARGERS at least three times a week.
7. Toss out all of the stupid return address labels with the old address on them. DONE! Yay!
8. Figure out what happened to all of the boys' socks. still a mystery...
9. Hang up that one jacket that keeps getting moved from chair to couch to ottoman to chair....
10. Take another nap. I have been very successful in this respect. YAY ME!