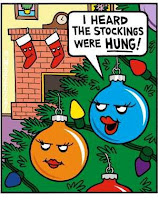 I aspire to be Grammar Girl

(subtitle: It may be time to adjust my meds)

This is has the distinct possibility of becoming my favorite Christmas song EVER.

Rude-off the Red Nose Reindeer (reindeer)
Had a very shiny nose (like a flashlight!)
And if you ever saw it (saw it)
You would even say it glows (like a flashlight!)
All of the other reindeer (reindeer)
Used to laugh and call him names (like Pinoklio)*
They never let poor Rude-off (Rude-off)
Join in any reindeer games (like Fronokoly)**
Then one foggy Christmas Eve,
Santa came to say (ho ho ho!)
Rude-off with your nose so bright,
Won't you guide my sleigh tonight?
Then how the reindeer loved him (loved him)
As they shouted out with glee (Whip Cream!)
Rude-off the Red Nose Reindeer (reindeer)
You'll go down in history (Like Fronokoly!)**

*Pretty sure that this is Pinocchio

**I think that this is the five-year-old word for "Monopoly," but he just looks at me like I have brain damage when I ask him about it.
Posted by buffi at 12:00 PM No comments:

I got a review copy book in the mail today from a PR firm who shall remain nameless - mostly because I think that they are really nice & I don't want to burn any bridges (or cut off my book supplier). Inside the front cover was a bookmark with a quote that, I think, was supposed to be deeply profound:

"If you were far out in space, you would see that the sun neither rises nor sets, but that it shines continuously"

WTF does that even mean?

You know, if you were far out in space, you'd better hope like hell you were in - or attached to - some sort of space craft or the rising and/or setting of the sun would be the least of your worries.

Email ThisBlogThis!Share to TwitterShare to FacebookShare to Pinterest
Labels: insanity, stuff nobody really cares about, WTF?, yeah I'm a jerk

A leeeeeetle freaked out here.....

So, my mom calls last night, a little after 10:00. I was in bed, reading & just about to turn off the light. Honestly, I thought that the call was for SD, since his job brings late night calls several times a month. But...no. It was my mom.

She tells me that my brother had been assaulted when he stopped to get gas for his girlfriend's car. He got out, started pumping and the next thing he knew, there was a fist hitting his face, knocking him to the ground. Then the guy took off. My brother's wallet, watch and a laptop were in the car & the guy took nothing.

Then my brother evidently drove back to his girlfriend's house and she totally freaked out. She took him to the ER where they determined - as of last night, anyway - that he has a broken jaw and one of his teeth got knocked out. They were going to do a CT scan to see if he had a concussion and to make sure that he hadn't inhaled the tooth, since he couldn't find it. How scary is that?

This happened in the "good part" of town - a gas station on a major intersection in the early evening. The police managed to get the surveillance video. They didn't see the guy's face but they did get his license plate. They seem to think that it was a case of mistaken identity. Someone who was planning to kick some guy's ass then realized he had the wrong guy & took off. Especially since my brother wasn't robbed. Regardless, I told my mom (who couldn't bear to go to the hospital & sent my dad) to make sure that all of the doors were deadbolted. Because who knows if it wasn't someone he knew and who is CRAZY?!

My brother has made some really, really bad choices in his life and has suffered the consequences of those choices. He's like a living example for my kids of what NOT to do. In spite of that he is one of the sweetest, most caring, empathetic people I have ever known in my life. If he loves you, then there is truly & honestly nothing he wouldn't do for you. He adores my kids and they adore him. My heart has always hurt for him because he is simultaneously the toughest and most fragile person in the world. He takes things so personally and feels things very deeply.

I'm just scared for him right now, though. I really hope that the police are right & this was just a random case of mistaken identity. Because I hate the thought that someone is out there who wants to hurt my baby brother! But if I do find out who did this, I may have to unleash some big sister revenge. Because even when we are middle aged, nobody better mess with my baby brother!

Spoke to my dad this morning & my brother's jaw is broken in two places and the tooth that got knocked out broke off, leaving the root (also the site of one of the breaks, the other being where fist met jaw). OW. He is scheduled for surgery this afternoon and will have two plates in his jaw and lots & lots of stitches. No word from police yet. Good times.

**UPDATE #2***
He's in surgery now. His jaw was actually broken in three places. Both joints and then around his chin - something about the force of the impact going all the way through. He'll have three titanium plates put in and then the dr will try to but his teeth all back the right way. I'm thinking I'll get him a milkshake machine for Christmas.

**POST_SURGERY UPDATE***
He did really well in surgery. He ended up w/ four titanium plates (two in his chin!) and 26 screws in his jaw. ZOWIE! He seems to be okay. He was talking a little bit last night. And that tooth that got knocked out? There was no tooth knocked out. What looked like a broken tooth on the x-ray was actually the break in his jaw bone. It was so huge and jagged that it looked like a broken tooth. (Yeah. Insert expletive here.) I'm buying him a hockey mask.

Thank you for all of your prayers and good thoughts & messages. It got me through yesterday! I love you guys!
Posted by buffi at 9:12 AM No comments: