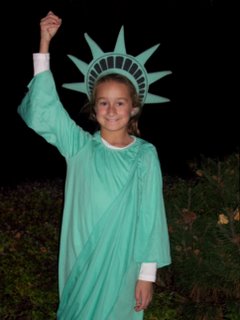 Bring us your sweet, your sour, your chocolates, yearning to be eaten! (Quote from Brian!)
SugarPlum chose to be the Statue of Liberty again, saving me the money for the Hermione costume. We couldn't find the torch. But that was cool, because really, it just weighs you down. 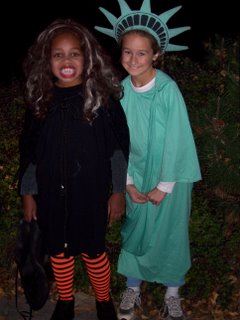 SugarPlum and her buddy & next door neighbor N. 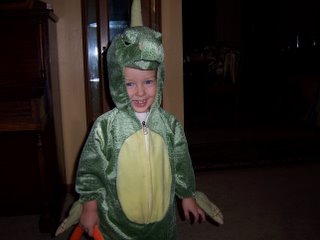 My "Scawy" Dinosaur. You have to hear him roar. Cutest. roar. ever. 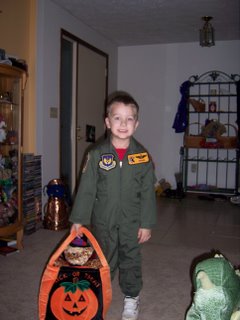 My sweet little fighter pilot! He was pissed that we didn't have boots like Daddy's for him to wear! 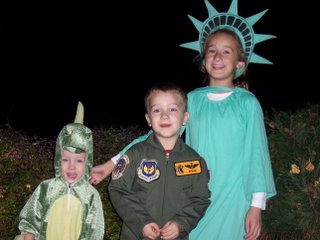 Making the world safe for us all! 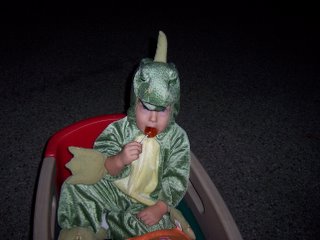 He's done. No more trick. Give me the dang treats already!

We all had such a great time last night. The weather was beautiful, even in the dark, it was 60 degrees. Just cool enough that nobody was hot in their costume, but warm enough to go without coats.

SugarBug wasn't quite sure what we were doing at first. He wanted to go into every house. Once he figured it out though, he was all about Trick-or-Treating! He kept telling me "I YIKE trick-or-treat!" He wanted to walk and stay out of the wagon at first. Since he is a little slower, I stayed back with him while Bear and the girls went on ahead with SD. We caught up to them about every third house as they zig-zagged across the streets.

After about 10 or so houses, Bug needed a rest. He got out if there was a dog or a "baby" (anyone his age or younger) and he kept telling me that the little girls were Baby Fafe! (His internet crush)

At one house, these guys were outside being pirates and basically scaring the pants off all of the trick-or-treaters. They were very good natured about it and had kids "walk the plank" to get candy. My boys were not impressed, unless you counts clinging to Mommy and shaking "impressed." The guy handing out candy was nice & walked the plank to them and let them pull out a chocolate "finger" and "ear." Pretty funny. Bear couldn't wait to get home & eat the finger. But, when we passed back by that house on the way home, we had to walk waaaaaay on the other side of the street!

We stopped at another friend's house. She is a college math professor, and they had the best pumpkin/jack-o-lantern ever. At first it looked like it just had numbers carved into it. Then her son showed me the Greek letter carved in the side and told me that it was "Pumpkin Pi!" Hahahhaaha!!! Sure enough, the number around the top was 3.14(whatever.....). That cracks me up!

By the time we got there, Bug was completely done and just wanted to ride in the wagon and have a lollipop.

We got home just before bedtime and let everyone have one piece of candy. Bear, of course wanted the "finger!" Then we got to hear about how they all wanted more. And how it wasn't fair. It was a fairly half-hearted argument from all, however, because they were so worn out from the walking. And, in spite of the sugar, they all went to bed fairly easily.

I'm thinking of letting them just eat as much candy as they want after school today, just to get it out of their systems. They aren't used to much sugar. I'm thinking if they overload today, maybe they will develop an aversion. Fantasy, I know, but please allow me to cling it for now. I really don't feel like fighting them today. And, who knows? Enough candy and maybe they will all just fall into sugar comas and sleep until tomorrow morning. And then, I won't have to cook dinner. This fantasy just gets better and better!

Oddly enough, I haven't had any of the Halloween candy. None. At. All. No reason, really, just haven't wanted it. I know, call a doctor. Maybe the gym is doing me some good after all.

Hope you all had a wonderful Halloween!