Hey! We actually DID something this weekend!

***Please go over to Mommy Matters for a second and give my good friend, Christine a hug. Her beloved puppy dog, Kabiel, passed away last night. I know she is very sad and could use the support. Thanks!***


We finally decided to get everyone out of the house and do something this weekend. So, after naptime Saturday, we loaded up and headed out to the Boonshoft Museum of Discovery. It was a good move. We all had a blast. There was something for each of the kids. Lots of science: physics, water stuff, animals.

The Ohio wildlife exhibit was cool, but a little sad. There was a coyote that just looked so depressed. She was in this glass enclosure with some hay to lay on, but no place to run and be a real coyote. She just lay there looking resigned to her fate. The same for the bobcat that they had. Just sad. The otter at least had a pool of water to play in. He was pretty social coming up to the window and the people watching him. Of course, he could have also been telling us to leave him the hell alone.

We lost Bug for a few minutes while we were in there with the animals. SP and I were in there looking at the animals with Bug, while SugarDaddy took Bear back to the "garbage" exhibit. There was another little boy there about Bug's size. I thought Bug was right next to me, but when I looked down it was the other little boy. Panic! I looked around and called & called for him, but no response. Finally, I told SP to stay there while I went to see if he walked out to where Bear & his daddy were. No dice. I went back in with the animals and here came SP walking up with Bug. He had been back there looking at the "Snakes, Mommy!" the whole time. Yes, I had physical contact with the child the rest of our time there.

Finally, it was time for feeding the otters and we got to watch that. Bug thought it was a riot that they fed him hamburger meat first. He's still talking about it, except that he thinks it was a beaver so he says "Beaver eated a hungaburger!" Then Bear & SugarPlum went downstairs to see the otter/beaver (botter? ottver?) catch the fish that the guy threw in there to him. Then he would bring it up out of the water to eat it. Otters have big teeth!

After the feeding, SD took SugarPlum over to the "Grossology" exhibit. It had stuff about poop and puke and burps and farts. An eight year old's dream come true. The boys wanted to stay and "shop" in the little General Store that they have set up, so I sat and watched them. They were so funny. There were kid-sized carts and shelves with groceries (empty boxes) and bins with fake vegetables, bread, etc. Then they got to take it over to the little cash registers and check it out themselves. And then? They put it all up themselves! It was quite a strange phenomenon, I've never witnessed anything like it.

(on a side note, whenever I say the word "phenomenon," I think of that "Manamana" song from the Muppets and now I will be humming it in my sleep)


They also had a place where the kids could work on a play pick-up. My boys could have stayed there all day. AND there was an "Animal Hospital" where they could doctor stuffed animals. At the end we let them play on the climbing structures and in the water tables. They were soaked.

We went ahead and paid for a family membership when we first got there. I am so glad we did. We are totally going to get our money's worth. I'm thinking we will be spending a lot of time there over Christmas break. 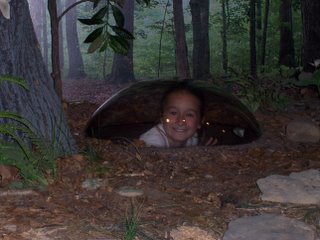 SugarPlum popping her head up in the "Wild Ohio" exhibit 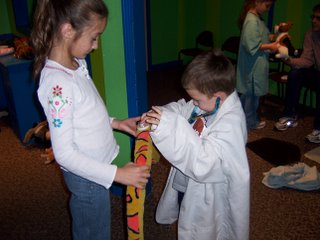 Bear being a vet in the "Animal Hospital" 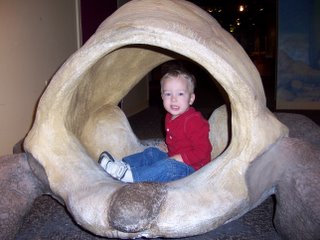 Bug tries out life as a turtle 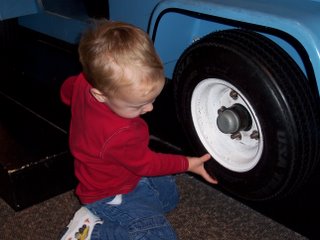 This truck held the boys' attention for quite some time! 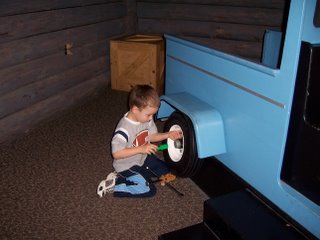 Bear told me he was "workin' hard!"

Okay, I lied, sue me. Blogger is being a pain in the ass & won't upload my pictures. I'll try again tomorrow, I'm going to bed. Got it fixed! Go!...See!